Please note that JavaScript and style sheet are used in this website, due to unadaptability of the style sheet with the browser used in your computer, pages may not look as original.Even in such a case, however, the contents can be used safely.

ITS (Intelligent Transport Systems) has been widely spread around the world that was first born in Japan as a system to integrate people, roads and vehicles in order to solve road traffic issues such as congestion and accidents, and environmental deteriorations.

ITS with cutting-edge technologies in telecommunication and so on brings about optimization of transportation demands, reduction of traffic accidents and congestions. Thus it will realize an ecofriendly society with seamless and secure mobility.

In Japan some of ITS applications have been popularly spread, such as car navigation system, traffic information via VICS, and automatic toll payment by ETC. These systems nowadays have been indispensable infrastructures to make driving safer, securer, and pleasanter. 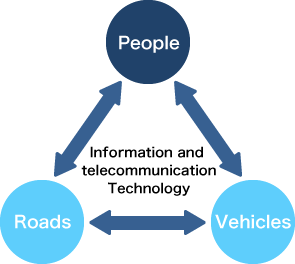 Progress of Japan's ITS 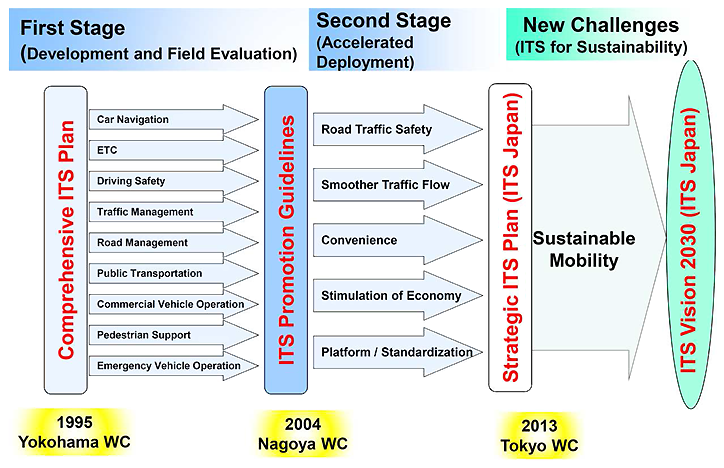 Japan's ITS has been studied, developed, and spread as a national project with a cooperation of industries, academia, and government in 9 fields of category determined in the comprehensive master plan for ITS development in July 1996.

Some of Individual components of ITS ---- navigation system, VICS, ETC, ASV and so on ---- have been studied and developed. In addition, such basic components for ITS have also been arranged as digital road map, traffic information gathering system, etc.

A review was done by R&D teams from industries, academia, and government on the topic about remained subjects in the first stage for practical applications and spread of ITS. As a result, ITS guideline toward security, ecofriendliness, and amenity was determined by Japan ITS Promotion Congress. Thus a heading direction for the second stage was set forth.

The guideline was incorporated in the new IT Reformation Strategy in January 2006, and ITS with its technologies was recognized as a key component in the national strategy contributing to security, ecofriendliness, and amenity of the society. Hence, a project was initiated to develop practical applications for infrastructure-vehicle cooperative secure driving for realization of the most secure society of road transportation in the world.

As a result of continuing efforts, VICS and ETC have been rapidly widespread throughout japan, and become an indispensable equipment of vehicles. Currently new applications are under development conforming to a platform formed by widespread infrastructures and onboard units. In addition to user benefits such as optimized driving route guidance and smooth driving through tollgates, such social benefits have been also brought about as reduction in traffic congestions, accidents, and exhaust gases.

Vehicle navigation system and ETC have vitalized a market of onboard equipment in the field of convenience and amenity, in which hundreds billion Yen of transactions are being produced annually. The more spreads the usage of telecommunication, electronic transaction, and electronic control devices, the more expands the market due to growing recognition among citizens regarding vehicle-related services and functions such as telematics and preventive safety.

In the near future, ITS should contribute to realization of a society with sustainable mobility which assures ideal global environment, affluent livings of the nation, and industrial and cultural development. ITS was stipulated to be one of solutions to bring that society in the government policies ----- the new IT Reformation Strategy, Innovation 25 Strategic Conference, Total Science and Technology Conference, as well as in the private policies such as the Council on Competitiveness-Nippon (COCN) for the industrial field.

Thus, the next ITS should cope with not only transportation issues but also a wide variety of social subjects -----industrial competitiveness, energy savings, decreasing birthrate and aging population, revitalization of local communities, and so on. It requires a total approach to efficiently solve these issues with limited resources. In other words, it requires: Widespread of next generation vehicles (electric, plug-in hybrid, fuel-cell, advanced drive assist), introduction of next generation ITS with the latest ICT (gathering up and provision of traffic information, advanced traffic management, cooperative infrastructure), construction of efficient transportation and logistic infrastructure (multi-modal transportation, public transportation, urban structures), cooperative action by industries and citizens (traffic demand management, optimized choice of transportation modes, modal shift, joint delivery), and legislation of the governmental policies to promote these measures.

ITS Services to be Deployed in the Future

The following items has been included in a strategic action plan determined to develop next ITS services:

(Reference: Proposal of Future Creation through ITS ---October 2013, ITS Japan)

Deployment of Japan's ITS Services 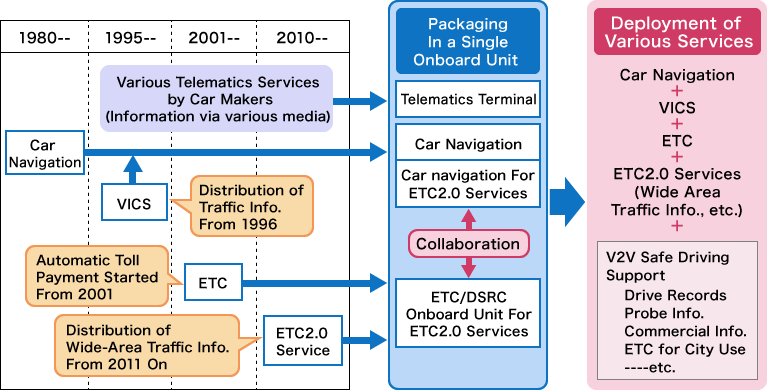 ITS spot service (ETC2.0 services) started in 2011 transmits various traffic information through ITS spots installed alongside the roads. As doing in ETC, ITS-TEA plays likewise such roles in ETC2.0 services as maintenance of information security standards, issuance of encrypted key data and setup data, provision of interoperability test facility, standardization of specifications, and promotion of the service. 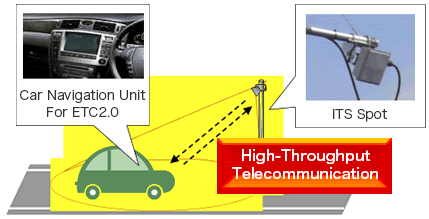